For other design priciples please refer

Here we will look into the Open closed principle.According to the open closed principle we are allowed to add behaviour to a class but not able to modify it.In other words whatever functionality is already implemented by a class we should be able to extend that functionality through inheritance but not allowed to change its existing implementation.

In the following example we have defined two classes

The Student class declares a method called score which will calculate the average score of the student.In this method we are using a different logic for score calculation of students in Category1 and students in Category2 which are based on the class such as High school.

So our application works fine now and is able to calculate the score of students based on his class or standard.

But if the score calculation logic changes tomorrow for students between class 6 to class 8th ,called Category 3,to include only the top 5 scoring subjects,then we may again have to modify the Student class.

Every time there is change in score calculation logic our Student class needs to be modified.

Instead of defining the functionality for all the Students in the common Student class we will add a new abstract class called BaseStudent .Every time we need to add a new category of Students we add a new class instead of modifying the existing Student class.The class for students in Category1 can be defined as:

Each time there is a requirement to add a new category of students we add a new StudentCategory class deriving from BaseStudent class which defines the abstract method CalculateScore.

So we have applied the open closed principle in our existing design and have got the following advantages:

Before implementing Repository pattern in C# ,it would be useful to first understand what is Repository Design Pattern.It is about how an application stores and retrieves data from the data stores which actually stores the application data.

Presentation tier provides the interface by which user interacts with the application.Middle tier includes the business functionality and also interacts with the database.Data tier defines the data storage or persistence mechanism used such as the SQL Server or the Oracle database.

There are few problem of including the data access functionality in the middle tier.Some of these are: 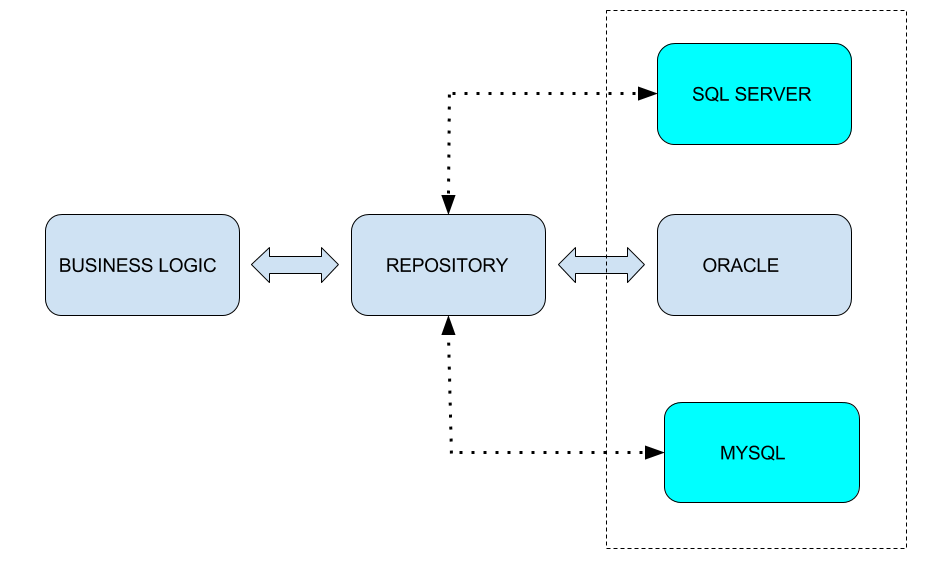 What is Repository Pattern

How Repository Pattern is implemented in C#

The way to implement repository pattern in our application is as:

It is the third step which helps create decoupled architecture and helps in unit testing.Since we are accessing the repository using the interface rather than through concrete classes we can easily point the interface to a different implementation without changing any of the business layer logic.This also helps in mocking as we can create a mock object for the repository.

In the following example we will implement repository pattern in c#.

If we have defined a Student class as:

We can  define an interface for Student repository as:

The above interface defines just the signature of the methods and the different implementations of the interface can implement them differently.For example if we want to persist the Students class details in a SQL Server database then we can use the following SQLRepository class:

We can have several implementations of the same repository class.But what matters is that our business logic which is defined by the student class is oblivious to all the low level implementation details.

Another implementation of  IRepository  is DBRepository .This uses Entity Framework for performing database CRUD operations.So we can easily replace any of these implementations in the Student class.

We define a generic repository class using the following structure:

We can modify the above generic repository depending on the scenario.We can add methods as required ,in the repository.

As you can see in the above example the advantage of using the repository to access the database is that the repository class ,such as the one being referenced from the Student class above ,can be easily replaced with a a different implementation as long as it implements the IRepository interface.

So we can easily move the data persistence logic from SQL Server to Oracle without any changes to the client or the consumer class.

Since the data access logic is decoupled from the rest of the application this provides the following advantages:

Any software application consists of numerous classes and the different classes provides different functionalities.So any object oriented application is composed of many classes which interact with each other to achieve the required functionality.

If we look at the architecture of any application then we can easily find that there are high level classes and the low level classes.

Though the above design is fine since Store class depends on the ElectronicDevice class so it may need to refer it but still it has one problem.The problem is that the Store  class depends directly on the ElectronicDevice class.So if our Store stops selling all the electronic products but just sells the HandHeldDevice then we may need to change the implementation of the Store class. HandHeldDevice class is defined as:

Since HandHeldDevice is a separate class so we will have to change the Store class which causes the following problems:

So if we apply the Dependency Inversion Principle to the above example then we may redesign the solution as:

So now instead of referring any particular class in the Department class we are refering the interface IDevice.The IDevice interface can refer to any class such ElectronicDevice or the HandHeldDevice.

So the above line still creates a dependency on the HandHeldDevicesRepository repository.So we can not still say that the Store class is not referring any class.

and passing the device object as a type parameter to the generic  DevicesRepository class.

Now the Store class is totally decoupled from the Device class and will not need to be changed if the Sore starts selling a new device type.We have followed the Dependency Inversion Principle in the above example and introduced interface IDevice interface which the Store class is referring instead of referring a concrete class.

As we have seen Dependency Inversion Principle helps create decoupled architecture in which changes in the application can be easily accommodated without  much impact.

Interface is used to provide the specification or the abstraction of the functionality .In other words it just defines the signature of the methods without any implementation details.Implementing classes are required to implement all of the methods declared by an interface.

Interface Segregation Principle states that Client should not be forced to implement the methods which it don’t need.

Lets understand this with an example

Suppose we have an interface which is contains the methods supposed to send email.

So any class which need to send an email will implement this interface and will provide the implementation of all the contained methods.

Now suppose we need to implement the logging functionality as well in our class when an email is sent.So we are tempted to modify the existing interface and introduce a new method to do the logging

The above example though looks fine but has few problems

The interface IEmail defined above is an example of fat interface.Fat interface is an interface which contains lots of methods and  many of the methods are not required by most of the clients.

If we have a single interface which contains lots of unrelated methods then if we make only a small change in that interface then not only will all the existing classes will need to be changed but also they will be required to be tested again which can be a significant effort.

In contrast if the interface contains only small number of related methods then this means that only specific classes will require to be changed.So ISP or Interface segregation principle helps develop applications which are easier to maintain and refactor.

This is another example of fat interface

Following an interface which defines a bunch of methods

This is an example of a fat interface.This is not a very good design and will create the following problems
If a class requires functionality for only one department ,such as HR he is expected to implement all the methods whether he requires them or not.
If you make even a small change in the fat interface there is a good probability of breaking the entire application ,if there is a bug in the functionality.

This design provides following benefits:
user will instantiate class implementing a specific interface rather then a single interface containing all the functioanlity.
there is less chance of breaking application if there is an error in specific interface.

JSON is a data exchange format which is commonly used to exchange the data between the web server and the web browser.In Fetching json data using jquery ajax in MVC  we looked at how to fetch data using JSON from the MVC controller.Now we will see how to pass data in JSON format from the web browser to the controller action method.

In the following example user will be entering data in a html table.The data will posted to the action method in the JSON format.The action method parameter will be populated with the posted JSON objects ,using the built in model binding.Once we have the collection of objects in the action method we can  perform an operation on it such as saving in the database.

We will be sending the following object using json from the view to the action method.

In the view we are creating an html table having multiple rows.Each row has different cells corresponding to the Employee class properties such as Name,Address and Phone number.

In the button click method we are calling the Update() method.

In this method we are looping through the rows of the table tblEmployees using the jQuery each() function.In the function passed to the each method we are creating a new javascript object using the following

Finally we are passing this array using the jQuery ajax method to the action method.We are converting the javascript object to json object using the JSON.stringify() method as:

We have defined the controller as:

After the action method is called the empLst parameter will contain the list of  employee objects which we had passed using json.

So while posting json data using jquery ajax in MVC we can get the objects in the action method without the need to manually map the posted values.