Finally what we all had been waiting for is here, Visual Studio 2015 RTM has been released last month.This version of Visual studio includes many new features.

There have been many releases of the Visual Studio over the years .Each new release introduced a new and enhanced version of the .NET framework.This version includes .NET Framework 4.6 .

We have seen many new frameworks released such as MVC for web application development,WPF for windows applications,WCF and WebAPI for service based applications.Visual Studio 2015 includes not only ASP.NET 5 but also lots of new and useful features.

The Diagnostics Tools window allows us to view and analyse the performance data when we are debugging the code.It can provide us with details such as memory and  CPU consumption.This allows us to view how the code is behaving and optimize it accordingly. 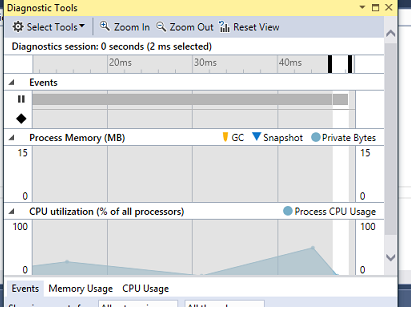 This feature provides us information about how much time a particular block of code is taking.If we set two breakpoints then at the second break point line it will show us the time it took to to execute the code between the two breakpoints. 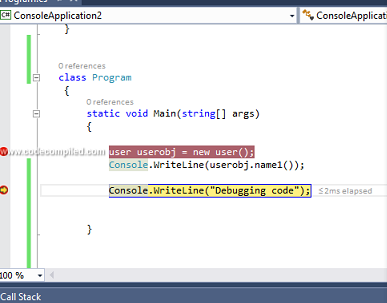 In the above code it is showing that it took less than 2ms to execute the code.Perf tips and diagnostic tools allows to analyze the performance early while developing code.This means less refactoring is required later on for performance related issues.

Visual studio 2015 includes a new compiler called Roslyn.Roslyn is an open source compiler API for C# and VB.This means that we can use the API to write tools such as code analyzers.

New compilation model informs us of the errors in the code as we write the code.For example in the previous versions we had to compile the code to get the information about any compilation errors but now we are informed about the errors in real time as they occur.

LINQ and Lambda expression support in Immediate and Watch windows

We always wanted to be able to execute lambda expressions and LINQ queries in the immediate and watch windows but previous versions of Visual Studio didn’t allow this.Visual Studio 2015 gives us this option.So if we have the following generic list of integers

Light bulbs are icons that appear to provide help in refactoring of code and fixing of errors.So light bulb means that Visual Studio can automatically apply code updates for us.This can save us time spent in writing the code.

On clicking the light bulb icon Visual Studio displays the various options to fix the error and also the preview of the refactored code.

Now Visual Studio supports AngularJS and RequireJS.So the editor understands these frameworks and will provide intellisense for them.

We can use comments such as // TODO:  or // HACK: which Visual Studio will keep track of and display them as reminders in the task list.

The previous frameworks have always targeted the windows OS.There was no way to directly develop mobile applications in Visual Studio for the different platforms such as iOS, Android and linux.

Unlike the previous versions of the Community edition in which many of the required features were missing it now includes all of the necessary features.Visual Studio Code is the new code editor which is free and supports different platforms such as Mac OS, Windows, and Linux.It supports
many of the features of the Visual Studio.

It is available at Code for Visual Studio

The open source support in this release of Visual studio is reflected in the types of frameworks the IDE supports.Now IDE provides intellisense support for Angular and Node.js out of the box.Another area where it reflects is the integration between Visual studio and GitHub.

LINQ is a powerful language feature which allows us to query different data sources using the programming language syntax.We can use C# to query the data source whether it is Oracle,SQL Server or XML.The query we use will be same irrespective of the data source.

While working with ADO.NET a common requirement is to query the data tables for matching data.If we don’t use LINQ then we need to write complex logic to iterate over the entire table and retrieve the required data.Using LINQ we can easily query the table for the appropriate data.

We can use LINQ queries to implement this scenario.We can easily join two tables and retrieve the data from them using a relatively simple LINQ query.

We can join the above table using the following LINQ query

Similar to SQL join the two tables should have a common column such as the id column in the above query.If you have used SQL before you will realize that the join query resembles the sql join statement.

Expression bodied function members is a new feature introduced in C# 6.It makes methods more concise ,easy to read and understand.
Before C#6 we used to write the methods having a method body surrounded by curly braces.Whether we are returning a single value or not our method consists of multiple lines of code. There was no other way but to write the method body.

For example if we want to write a simple method which calculates the sum of the parameters below is the only option to write such methods.

We can use expression bodies not only with methods but also with other function members such as properties.For example if we have the following property

we can write it as:

Using  most of these helper methods is similar as we need to pass the name
and the value which we want to render in the generated HTML.Usage of DropDownList helper method is different since a Dropdown  can have  multiple elements which the user can select. And for each item in dropdown both value and text properties needs to be set.

Dropdown is rendered as:

To populate dropdownlist in mvc we need to do the following:

Above SelectListItems will render the following dropdown

Since ado.net datatable doesn’t implement this interface hence we can not use linq queries for querying the datatable directly. 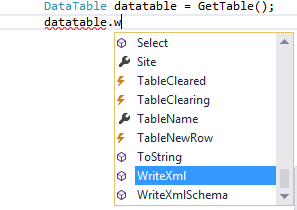 To query datatable using linq we call the AsEnumerable() method of the DataTable.Calling this method on the DataTable returns an object which implements the IEnumerable<T> interface.Now we can perform LINQ queries on this object.

To use this method we need to do the following

Now we can perform the normal linq queries on the datatable.For example to search for a product with id 2 we can use the following linq query

In this example we are using the FirstorDefault() method.

Instead of using the extension methods we can write the above query using the expression syntax as:

Linq can help to perform complex queries on a datatable easily.We can use the different querying capabilities of the linq for performing different operations.For example we can project only few specific columns from a datatable using the select operation.The following operation will return only the product columns of the table.

To convert the IEnumerable<DataRow> back to the DataTable we can use CopyToDataTable() method.

In the following query we are selecting the rows from the data table where Id is greater than 1 and then populating a new data table with the returned values.