ASP.NET MVC is another option available to ASP.NET developers for creating web applications on the .NET platform.

View The view is just a template which is used to generate the user interface such as HTML.

Controller  The controller is responsible for accepting user input, performing operations on the model and selecting the view to render.

We can depict the relationship between the Model ,View and Controller with the below diagram.As we can see the controller is the Main component as it coordinates with both the View and the Model.Also note that the View is aware of the Model while Model is not aware of View.The advantage that this provides is that our application is loosely coupled.

The main advantages of using  ASP.NET MVC are

Separation of Concerns As the Model,View and Controller are separate we can update or replace any of the components without effecting the rest of the application.This results in better maintenance of the code.

Testability  As the controller are independent classes in MVC ,and not tightly coupled to the UI as WebForms , we can very easily unit test the application logic that the controller classes contains.

LightWeight  As there is no view state in MVC so the generated HTML is significantly smaller in size as compared to WerbForms.

Control over HTML and CSS   In WebForms there is HTML which is generated by the server controls over which we have little or no control.MVC doesn’t have server controls like webforms ,instead we provide the HTML that we want to return to the user.As we write the HTML so we can write HTML that is required.

MVC framework is defined in the System.Web.Mvc assembly.So we need to include this assembly in our MVC applications.

There has been many releases of MVC. The last official release was MVC 5. The preview of MVC 6 is also available now.

MVC 5 which was released as a part of visual studio 2013 has many new features.Some of these features are

ASP.NET Identity  The previous membership system has been replaced with ASP.NET identity which provides some nice features such as a authentication using login providers such as twitter.

Supports Bootstrap framework  Bootstrap is the most famous HTML, CSS, and Javascript framework for creating responsive and mobile first web sites.It is a totally free framework.

Attribute based routing  We can attach the attributes directly to the controller classes and action methods.In the previous versions we can add the routes only in a separate RouteConfig.cs file.

Scaffolding  This is a process which generates code based on our model classes.This is an automatic process so we don’t need to write the boilerplate code by hand as the basic structure is generated for us.

So this was just an introduction to ASP.NET MVC framework.The next article Controller in MVC describes controller ,which is one of the most important parts of mvc application, in more detail.

ASP.NET 5  ,codenamed ASP.NET vNEXT  is the next version of ASP.NET.It includes significant changes from the prvious versions of ASP.NET.This is because ASP.NET 5 has been redesigned for the web applications of today.Some of the important features of ASP.NET 5 are

Next we select the ASP.NET starter web template and click ok.

These are new files introduced in ASP.NET 5.

Two of the important methods used in the above code are

These are extension methods defined on the IApplicationBuilder interface.In the aboce code we have added two routes to the IRouteBuilder.

If we now run the application we get the below page using the default routes defined above.

So as we can see above the configure method gives us complete control over the components we want to add to the pipeline.

The role of the action method in the controller is to return an ActionResult,which often is ViewResult.The ViewResult is rendered by the ViewEngine so that the user is returned HTML or other appropriate response.

ViewEngineResult contains references to IView and IViewEngine .Once the ViewEngineResult  object is returned by the FindView() method ,IView implementation,such as razor , contains a render method which generates the response for the requested view.

If we are using the built in ViewEngine like razor then above tasks are handled automatically so we don’t need to be concerned about the above details.

This class contains an Execute method which contains the code to generate the appropriate HTML or other response.

Below is the execute method defined in the auto generated class

The code that is in the view is converted into  WriteLiteral methods in this class.

So our view is converted into a class at runtime and it is this class that generates the appropriate response.

In an MVC application there are three main components

Model contains the application data and the business rules for our application.View is the representation of the Model to the end user ,usually through some GUI such as HTML.Controller is the component which handles the user’s request ,selects the Model and returns the view.

Once the view is returned by the Controller action method it has to be rendered and returned to the user.The View rendering is done by the ViewEngine

There are several ViewEngine’s we can use in an MVC application.Some of the important ones are

Brail,NHaml and Spark are part of the MVCContrib library which is a library that adds functionality to the ASP.NET MVC Framework

The next version of ASP.NET is ASP.NET 5 which has been redesigned from the ground up. ASP.NET 5  supports the concepts that are expected in any modern web application like deploying on cloud and loosely coupled applications. Some of the new features in ASP.NET 5 are

We can create a ASP.NET 5 web application in visual studio 2015.

To create a new web apppication we select a new project option in visual studio ,a new project dialog box is displayed. Select the Web Application template and click next. 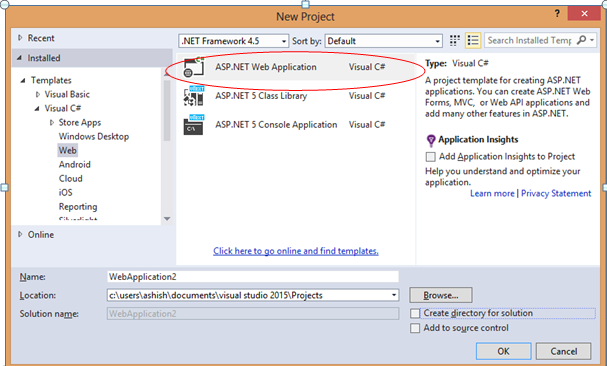 We select the Emty template in the MVC 6 project dialog and click next.We can uncheck the host in cloud option below as we will be running this application locally. 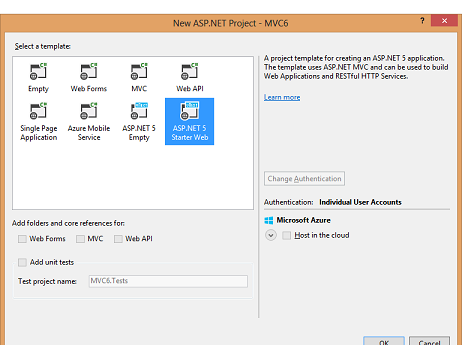 Once the new project is created we see that few files have been added by default in the soultion.These are new file types in ASP.NET 5. 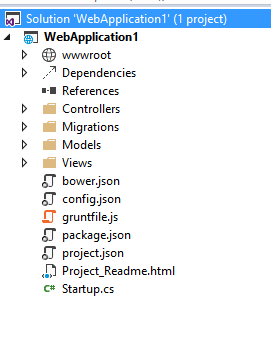 Some of the new files that are introdced in ASP.NET 5 are

If we look at the test controller it is defined as

There are few important things to note in the above code

We have a single controller class for both MVC and webapi applications instead of having a separate api controller for webapi as in previous versions of WebAPI.