The next version of c# contains many useful features.These new features will help us to perform the common tasks and to remove the boilerplate code.

In the prior versions of visual studio whenever we need to use a static member of a class we need to fully qualify the member using the name of the containing class. The using statement was used to import the namespaces only,now we can use using statement with a class to bring the static members of the class in scope.There is no way to bring to the static class members into scope.We can not use the following statement in the prior versions of visual studio

As Console is a class so we are not able to import it ,it is not recognized by the intellisense.

This can be a big convenience specially if we are accessing the static class member multiple times.

When working with function members,such as methods and properties, many times our method have just a single return statement. For example our method can be returning  the details of a person and contains just the return statement.Unfortunately we have to write the complete method body enclosed in the curl braces {} even in such a scenario.

Now with c# 6 we can write expressions in place of method body even in the case of named methods.So we can write a method to add two numbers using the below expression syntax.

The => above is called the lambda arrow and the right hand side is the function expression .

If we call the above method and pass the arguments as 2 and 3 we get the result 5 as expected.

Now we can declare an auto property which has just the get accessor. Behind the scenes the backing of the auto property is declared as readonly.

Auto properties can be initialized

Other nice feature of auto properties in C# 6 is that we can assign a value directly to the auto property at the time of declaration.This is similar to how we initialize a variable.

To format the strings we usually rely on the String.Format method.To format a string we use the format method as

Many times we need to access the value of an object property but as a safe check we also need to test if the object is not null.So mostly we use the code as below to check if the object itself is null or not.
//check and assign department and phone number

If we don’t check the null values  above we will get null reference exception.

Though this is a very common check to prevent runtime exceptions but we have to write the same code whenever we need to access property value.This is boilerplate code which we have to use and it would have been nice if there was a common way to perform the null check.

So we pass the method name as a string

To avoid such problems we can use the nameof operator which returns the name of the program element.

On calling the above method we get the exception as expected.On viewing the exception details we can see that the name of the message property is the method name which we are passing to the ArgumentException object. 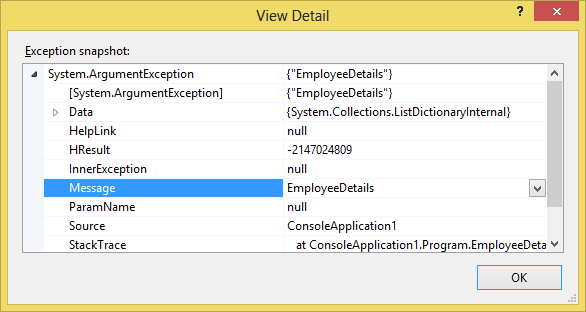 Now we can declare a parameterless constructor in a Structure.This is use usefull if we need to provide default values to Struct members which are different from the default values for the member datatypes.

So if want to initialize the new Employee variables with some default value we can provide the default values in the constrcutor.If we need to create many instances of the Employee struct then by default the struct fields will have the values which we have provided instead of setting the values on all the struct member variables.

Attributes are one of the main features of  c#.Attributes can be used if we want to attach metadata to the program elements such as class or method.Attributes are used with reflection to retrieve the metadata at runtime.

Conditional    This is used with methods and used to determine whether the method should execute.So if we attach the following attribute with a method then the method will execute for a debug build but not for the release build.

Serializable  This is used to mark a class as serializable

If the inbuilt attributes does not meet our requirements then we can easily create new attributes by declaring a new class deriving from the Attribute class.

We have added the the property Address.This represents the named parameter.

So we have created a new attribute Employee which we can apply to any program element.

The above code will restrict the attribute target to a class.AttributeTargets is an enum defined in the System namespace.Some of the members in the AttributeTargets enum are

Now let’s see how we can apply the attribute to a program element.

Attaching attributes to a program entity

This we need to add to the AssemblyInfo.cs file.

We can retrieve the information about the program element and access the attached attributes using reflection.This Using reflection in C# gives an overview about how to use reflection.

Let’s say we have a delegate variable defined as

Now if we call the delegate then it will return the first 5 digits of the parameter.We can call the lambda expression as

Below is the complete code which defines a delegate and assigns a lambda expression to it.

If we are defining a method only to assign it to a delegate then lambda expressions are the appropriate solution.

Constraints are used in Generics to restrict the types that can be substituted for type parameters. Here we will see some of the commonly used types of constraints.

When we create a new instance of a generic type we can restrict the types we can substitute for type parameters using constraints. If we try to substitute a type that does not comply with the constraint then we get a compile-time error. We specify constraints using the where clause. The following are some of the main types of constraints we can use with generics:

The following line will throw a compile-time error. This is because string is a reference type, so because of the value type constraint it is not valid to substitute a string as the type parameter.

The following line will throw a compile-time error since int is a value type:

But the following line will compile properly since string is a reference type:

The generic collection classes use various types of constraints. For example the “Icomparable<T>” interface sorts and determines the equality of items. The Icomparable interface has a “CompareTo” method that implementing classes should provide. So we can be sure that if a class implements Icomparable<T> then it can be sorted if used in a collection and also compared for equality.

So the following code works correctly:

While the following code gives a compilation error because of type mismatch between integer and string types.

So we get type safety by default when using generic types. If we had used the non generic ArrayList class instead of the generic List class we would have not gotten the compile time error but the run time error. Another advantage we got by using the generic type is that type casting and boxing is not required so this results in more optimized code.

We can create new Generic classes using type parameters. We specify the type parameter in angular brackets (< >) while declaring the class.

The following code is used to create a new generic class:

In the code above we have declared the variable of type parameter t as the class variable.

We create a new instance of the preceding generic class using the following code:

The output of executing the code above is “ashish”. The GetObj() method above simply returns the value of the parameter passed in the constructor.