JSON stands for JavaScript Object Notation.JSON is used for storing and exchanging data.It is important to understand that it is a subset of the javascript language.
It defines a set of rules for structuring the data.This means that it specifies how a certain piece of data should be structured.

JSON is a Data interchange Format

The data between web server and web browser was usually exchanged using XML.JSON provides an alternative to that.

XML though works across different platforms but JSON is a better alternative because of the following reasons:

It’s structure is simpler than XML so it is lightweight as compared to XML.For example to represent a contact entity in XML we will write XML as:

We can represent the same entity in JSON as:

Size of XML message is more than the same information represented in JSON.This difference can be huge if there are thousands of records.

This means that XML consumes more bandwidth than JSON.Today web applications are expected to have a very quick response time so JSON is the prefered format for web applications.

Data is represented in JSON using a collection of key/value pairs.Following is the syntax for structuring data in JSON
{ key1 : value1 , key2 :value2 …. keyN : value N}

Following code will populate EmployeeDetails object even though it is not referenced anywhere.

EmployeeDetails is an array of Employee type.The value of EmployeeDetails is fetched from the web service.Creating a proxy object and fetching the details of employees can take some time especially if there are thousands of records.In such a case it can be time consuming to create an object of Organization.

If the EmployeeDetails variable is never used then populating EmployeeDetails is not necessary.In such scenarios we can implement lazy initialization for the variable.Instead of providing custom implementation there is generic class provided by the framework.

Lazy<T> is a generic class in the System namespace .It can work with different datatypes.An object of Lazy<T> type is not created until it is actually referenced by the consumer.

So we can declare an EmployeeDetails variable as:

Now the EmployeeDetails object will only be created if it is referenced by the consumer.

Value is a readonly property which returns the underlying data.

Lazy object initialization in C# is used when a class refers a type which is expensive or time consuming to create.Instead of immediately creating an object of the referenced type it is deferred till it is actually referenced.In such scenarios it can be useful to save both time and resources required for creating a referenced type.

If our services are to be used across different platforms then they should support all the HTTP features.

Configuration is not very easy

If we develop a web service using ASP.NET then a proxy needs to be generated on the client to consume the web service. So these limitations doesn’t make the web services suitable for different types of clients.

HTTP is used as just a transport protocol

Web Services use HTTP as just a transport protocol.HTTP protocol is an application protocol             and provides different features such as:

WebAPI uses HTTP as an application protocol rather then just a transport protocol. 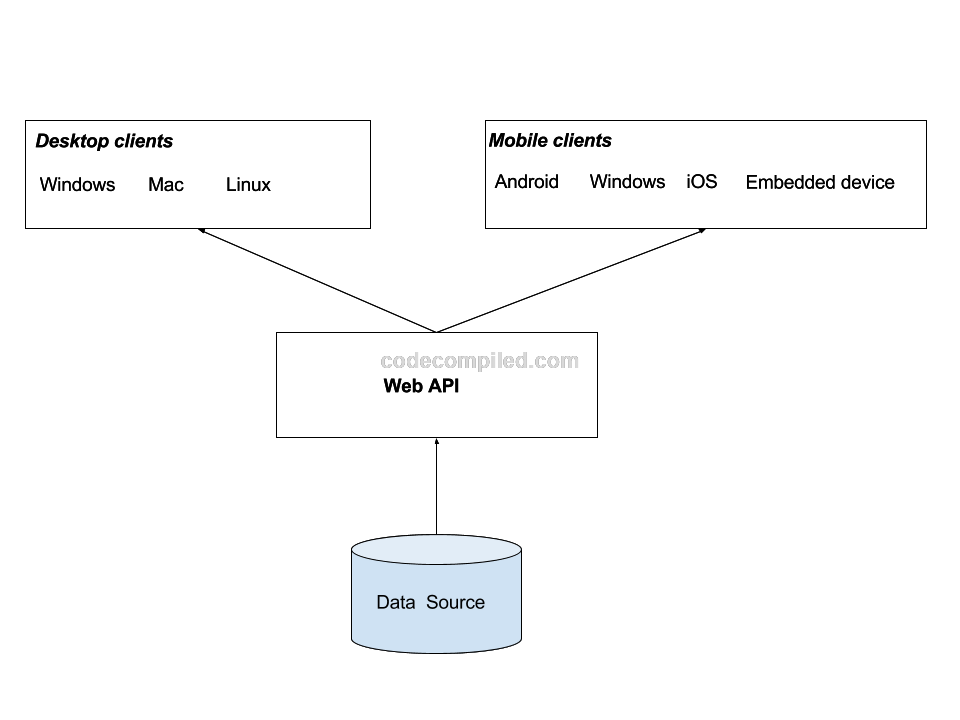 Some of the differences between WCF and ASP.NET WebAPI are: 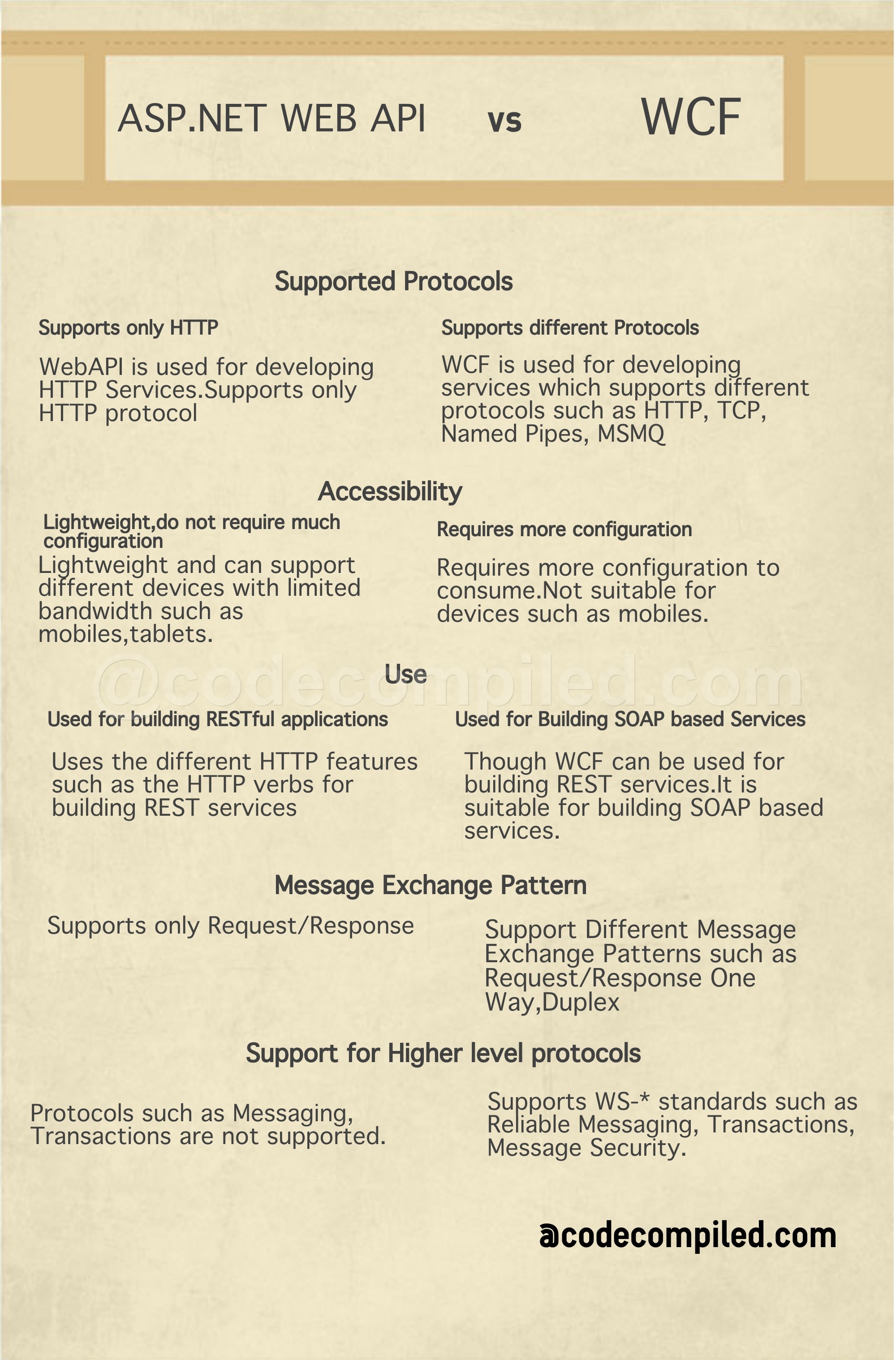 So when considering using WebAPI vs WCF for creating services it would be helpful to consider some of the above points.

Web applications traditionally consists of multiple pages.As the user interacts with the web page ,it results in a post back or request for a new web page.

If the user selects some input value on a web page it results in a new request to the web server.So as the user interacts with the different input elements on a web page there could be many requests to the server to  fetch the updated HTML.

Many web pages uses ajax to prevent a full page post back to the server.This approach prevents refreshing of the entire page.But if the web server is returning HTML back to the web page it can still have an impact on the performance as a section of a page will be rendered by the web server.

Also the user action may result in redirection to a different web page.

Interaction between web server and web browser always have some impact on the responsiveness of the web application.This is because there is always a network latency involved in request and response process.This prevents a web application from being as much responsive as a desktop application.

For understanding Single Page Application we need to consider the factors involved in developing a fluid web application.

Normal web applications consists of lots of requests to the server.This can have a big impact on the performance.So if we are contacting web server for every user interaction such as selecting a value in a dropdown or clicking on a context menu this could make the application appear less responsive to the user.

As the processing power of client machines is increasing day by day  and with multicore processors becoming common , it is more useful to implement the application logic on the client rather than on the server.Also scripting languages such as JavaScript is supported by most modern web browsers.

So application logic should be implemented on the client side instead of the server if we want to develop fluid web applications.

This means that the web page never refreshes and the user gets the same experience as a desktop application.

For starting development of Single Page Application suitable frameworks needs to be selected.

Some of the frameworks are:

Each of these frameworks use MVC architecture for creating SPA application.AngularJS provides support for templates.These templates are used to create the views which represents different UIs.
Views are always in sync with the model.So any changes in the model or view are automatically reflected in the other.

When working with collections sometimes we need to perform certain operations only for some of the elements in a collection and skip the rest of the elements.Skip operator is used in such cases.

It is used as:

where Collection is an object of type IEnumerable<T>

n can be any integer value

The following example will return all the elements except the first element which is 1.

In the following example we have a list of students.Each student has a name and marks which he has scored.
We can use the Skip() operator along with the OrderBy() operator to return the top 3 students based on his or her score.

Skip and SkipWhile skips the elements depending on the ordinal or a condition.But once an element is returned by these operator the remaining elements are also returned.So for example if we remove the OrberBy operator then once a student is found having more than 60 marks then the remaining students are also returned irrespective of the marks scored.

This will return all the elements since Robin is at the beginning of the list and he is having more than 60 marks.